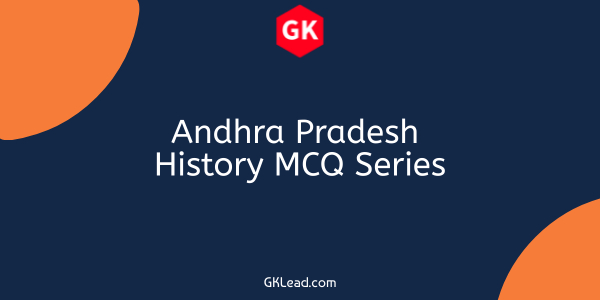 In this set, we have compiled the first set of Andhra Pradesh History MCQ GK for APPSC, UPSC, competitive examinations in India and Andhra Pradesh Government Job recruitment examinations. Find out the questions along with the answers below.

Q.1 Which of the following dynasty built the city Amaravati for the first time as per historic record?

Note: Amaravati was the capital of Satavahana Dynasty  who rules from 3rd century BCE to 3rd century CE.

Q.2 The Satavahana Dynasty reached its zenith under the rule of which king?

Q.3 In the inscription of Nanaghat, who among the following is mentioned as the first king of Satavahana Dynasty?

Q.4 Mahabalipuram Lighthouse was constructed during the reign of which of the following Pallava King?

Note: The Mahabalipuram lighthouse was constructed during the period of Pallava King Mahendravarman I.

Q. 5 Which of the following Pallava King is also known as Mahamalla or great wrestler?

Answer: B. Narasimhavarman I

Note: Pallava King Narasimhavarman I was also known as Mahamalla or the great wrestler. The city Mamallapuram is named after him.

Q. 6 The rock-cut temples of Mamallapuram was constructed during the reign of which Pallava King?

Q.7 The architectural creation of the Shore Temple was initiated by which of the following Pallava King?

Q.9 The coastal Andhara Pradesh was ruled by Ananda Gotrikas (335-425 CE)from which of the following region?

Note: The Ananda Gotrikas ruled the coastal Andhra Pradesh from their capital Kapotapuram from 335 CE to 425 CE .

Q.10 The only known Brihatpalayana ruler was?

Note: The Brihatpalayanas ruled the northern Andhra Pradesh from Kodur, near Machilipatam as their capital. Jaya Varma is the only known ruler of Brihatpalayanas. END_OF_DOCUMENT_TOKEN_TO_BE_REPLACED